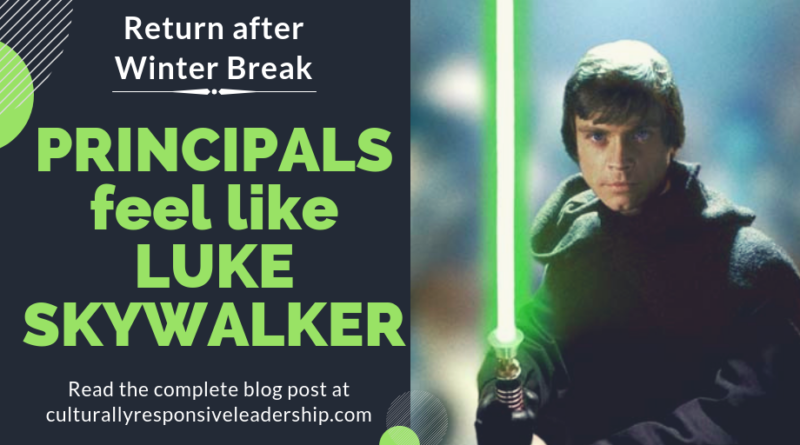 Before the Winter Break, I wrote about whether I still wanted to be a principal. And then I actually took a break. I’m still standing! As I return, I am feeling a lot like Luke Skywalker.

In sequel triology of Star Wars, the Last Jedi, Luke Skywalker had been in hiding for years while the resistance barely scraped by. See, Luke had seen the true costs of rebellion and he had had enough. I may not be there yet, but I feel it. You put your heart in and the beast is so strong. The empire is powerful.

Over break, I needed time to unplug, stash my lightsaber, and drink some blue milk.

I got a chance to relax and sleep more. Traveled up the Pacific Northwest with my family. Breathed some fresher air. I brought home 3 books.

I didn’t read one of them bad boys.

Ha. Well, I opened up the intro to 1 and closed it when it was time to give my daughter a bath. Funny how I had less time for reading during the break. I think I just needed to rest. Watched a lot of TV and movies. I ate plenty. 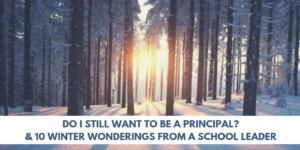 Reflections during time off

I thought a lot about work, peripherally at least. Do I Still Want to be a Principal?

It’s fulfilling. Where else can I get to create so much positive change for marginalized students?

Am I making a difference? Only time will tell but I would say yes. I believe this work is not about immediate changes, especially not in what Shane Safir calls the “satellite data.” The state tests, referral rates, reading scores. Seeing change starts with the environment. It’s about creating the conditions, being an engineer for equity. Its about the habits, the mindsets, the processes. And I must say,

the conditions are changing!

Am I working too hard? Hell yes. I probably average 50-55 hours per week. I wonder, how can I get closer to the 40 hour work week? I need to talk to my union! I would need to arrive at 8am and leave by 4pm. Every damn day.

That would mean no Instructional Leadership Team or Admin meetings until 4:45. No School Site Council Meetings until 6pm or evening events. And no weekend staff bulletin writing. No PD prepping after I put my daughter to sleep. That’s gonna be hard.

Obviously, sustainability is important. But, I know that if I really check out and take an extended break then the empire will strike back, the matrix will repair itself, and the colonizers will win. 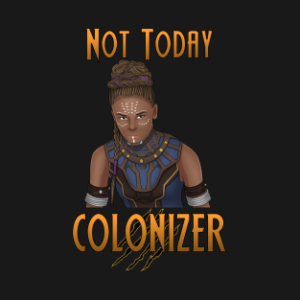 Be Prepared for the Empire to Strike Back

If I’m Luke, who’s the empire? Well, that’s simple. It is both systemic in internalized in our practices. The empire is the same colonial force that occupies our land, slowly assimilating, enslaving, or killing our people. Our “make American great again” mentality is the empire. It’s bigger than Trump. It’s racial bias, white fragility, and white supremacy culture. The dark side is attractive. 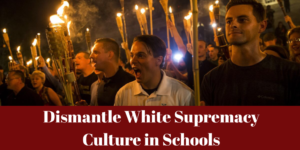 Langston Hughes wrote “America never was America to me.” Our public schools have not always made “the American dream” accessible to all.

Whether we were telling Xicanos they couldn’t speak Spanish in classrooms (1967), telling Chinese they couldn’t attend SFUSD schools (1859), or physically cutting off a Black boy’s powerful locks (2018), it’s the same fight. We are fighting to be seen as 5/5, fully human, of equal value.

We are still fighting.

You know that the other side “read some books” too and have a new found passion for “saving brown children,” or “not wasting resources on them“.

So you better be ready for war.

Be ready to defend your vision.

Be ready to state your equity purpose. 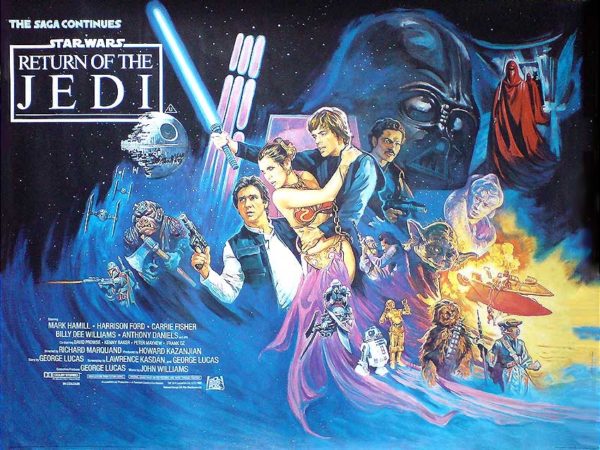 Return of the Jedi

I must come back like Luke after training with Yoda. Accepting my role as a Jedi in the war for justice. I need to be more clear-headed and more committed. 2019 must be about doing less and doing it mo betta. It will be about revisiting our goals and seeing how I can clear the hurdles for teachers to make change.

As I return to work, I’m coming back with recent events in my heart. I am thinking of the death of babies at the border. Murdered by negligent government policy and racist values.

I’m coming back with the hashtag #metoo on my mind, with inspiration by our new female and brown representation in Congress. These events center me and keep my eyes on the prize. It gives me steam to keep this engine going. 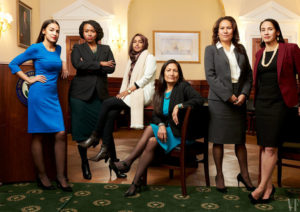 There are many wrongs left to right and fires to light. I’m coming back because my community needs me. To support the progress of my people. To empower marginalized students. 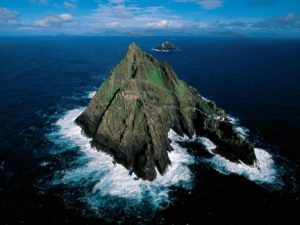 Conclusions: In a Galaxy Far and Away

One day, I expect to be an old Skywalker, hiding out on an island of the planet Ahch-To. Not yet though homie. I have many more years in me. Many more lightsaber battles to fight, and many more days of school leadership.

So for now, I will be meditating, finding the force within, and focusing on being a culturally responsive leader. I’m happy to know that there is a resistance of equity warriors out there to link up with. Shout out to all my #radicalprincipals out there!

As the wise Yoda once said, 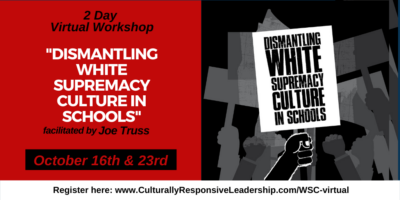